More Canadian medical-school graduates than ever failed to secure residency

More graduates of Canadian medical schools were shut out of residency placements this year than ever before, meaning the skills of dozens of doctors-in-training could be going to waste while many patients in Canada struggle to find family physicians.

The organization that matches medical students with residency spots revealed on Tuesday that 115 of this year’s Canadian medical-school graduates failed to secure a crucial training placement, up from 99 last year and 77 the year before.

Residency is the last leg of the long journey to become a doctor. If medical-school graduates do not complete between two and seven years of hands-on training as resident physicians, they cannot practice medicine. 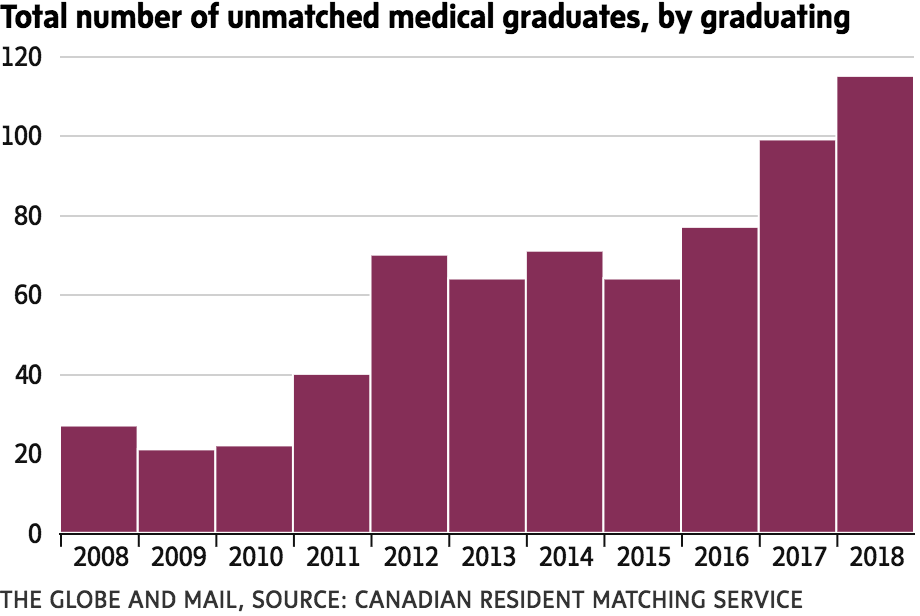 For the students who go unmatched, “it’s quite devastating,” said Henry Annan, a fourth-year medical student at Dalhousie University and the president of the Canadian Federation of Medical Students, which has been lobbying provincial governments to fund more residency positions.

“The stories that we hear are stories of hopelessness, of ‘Where did I go wrong?’ ” Mr. Annan said. “Unfortunately, it’s not really the individual’s fault. It’s the system failing.”

Mr. Annan’s group and the association that represents Canada’s 17 medical schools say the problem can be traced to some provincial governments either cutting residency positions or failing to fund enough new spots to keep pace with the number of graduates.

This year, for every 100 graduates of a Canadian medical school, there were 101 residency spots; a decade ago, that number was 111.

For graduates who don’t speak French, the ratio is even tighter. Of the 78 residency positions that went unfilled across the country this year, 69 were in Quebec.

Nationally, 3,308 residency positions were available. Residencies are based on area of specialty, so among the other reasons that some went unfilled was a mismatch between the type of residencies graduates wanted and the positions available. Doctors and medical students would like more residencies created so they would have more opportunities to get what they want and less chance of failing to secure a spot.

“There’s absolutely no flexibility in the system,” said Geneviève Moineau, president of the Association of Faculties of Medicine of Canada (AFMC.)

Ontario’s Liberal government, which is facing a tough election campaign in June, announced on Tuesday that it would add as many as 53 extra residency spots to accommodate the graduates of Ontario medical schools who failed to garner a placement this year.

The extra spots come with strings: Graduates who accept them have to agree to work in an underserved part of Ontario for two years after completing their training.

“It’s an excellent step to deal with the here and the now,” Dr. Moineau said of Ontario’s announcement. “[But] this doesn’t solve the issue of next year … what we want to hear from all provinces is how they will potentially move forward with a consistent increase in positions.” 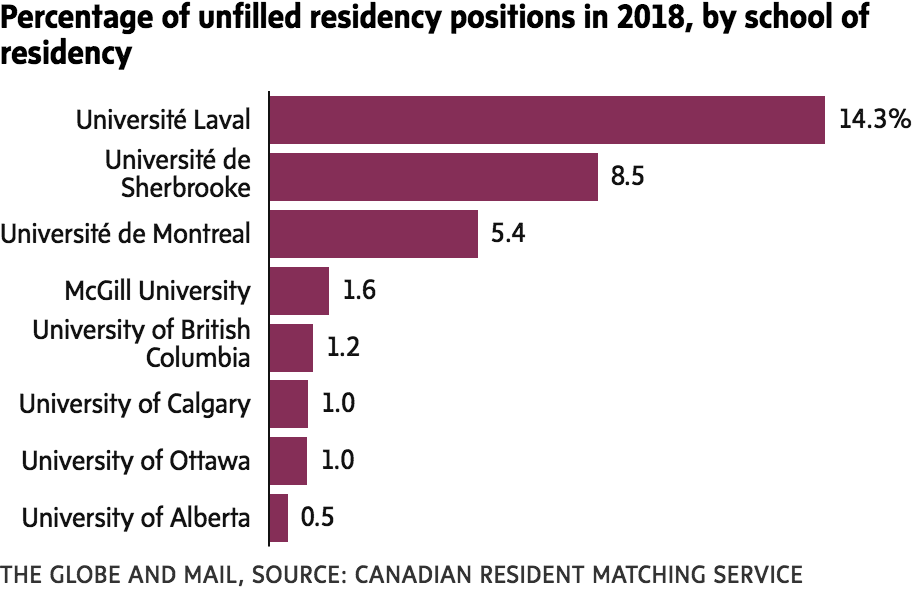 The Canadian Resident Matching Service, known as CaRMS, co-ordinates the process of medical students applying for their preferred residency positions and faculties of medicine ranking their preferred graduates for each spot.

The matching process has two rounds. This year, 46 students from Canadian schools decided not to reapply after going unmatched in the first round, while 69 went unmatched after the second and final round – for a total of 115 current-year, unmatched graduates.

But that figure does not include graduates from previous years who applied again. Fifty-four prior-year graduates went unmatched in 2018, up from 46 in 2017, although the chief executive officer of CaRMS said that figure could include trainees hoping to transfer from one residency placement to another.

In a report published earlier this year, the AFMC recommended changing the two-round process so graduates of international medical schools are not allowed to snag spots in the second round that could go to graduates of Canadian schools.

Of the 228 residency slots left unfilled after the first round this year, 42 went to students who graduated from medical schools outside of Canada or the United States.

“It is Canadian taxpayers’ dollars that provide [part of] the funding for medical education,” Dr. Moineau said. “Until every Canadian has a family doctor, we need to be doing everything we can to train physicians in Canada and enable them to complete their training.”

About 4.5 million Canadians say they do not have a regular doctor, according to Statistics Canada, despite Canada having more doctors overall today than ever before.

Rural and small-town areas tend to be most in need of doctors.