This article is in response to Tim Hortons slides from Top 10 in brand reputation survey. Click here to view the lesson plan.

For the first time in more than a decade – except for a slight aberration in 2013 – Tim Hortons Inc. is not among the top 10 companies or brands in terms of its reputation among consumers, the study by research firm Leger shows. Tim Hortons slipped to No. 50 from No. 4 last year, says the corporate reputation report, which is to be released on Thursday. (Tim Hortons came in 13th in 2013.)

The results come as Tim Hortons faces rising discontent from its franchisees about the management of the company and its heavy cost cutting, which they have said is hurting the brand. More recently, the company has come under attack for the way some of its franchisees in Ontario responded to higher minimum wages by scaling back employee benefits. The franchisees countered that the company, acquired in late 2014 by Brazilian private equity firm 3G Capital, failed to help them deal with the steeper costs of higher wages.

Amid the negative publicity, the reputation of the chain, Canada’s largest in the restaurant field, is slipping markedly, said Christian Bourque, executive vice-president at Leger.

“It’s a considerable drop,” he said in an interview.

Companies count on a solid reputation to help draw customers to their business. And while Tim Hortons’s overall sales are still climbing as the company opens more restaurants, its sales at existing – a key industry metric – dipped 0.1 per cent in 2017 compared with an increase of 2.5 per cent the previous year.

The shares of parent company Restaurant Brands International Inc. of Oakville, Ont., have slipped more than 10 per cent on the Toronto Stock Exchange since October.

Tim Hortons said in an e-mailed statement it and its restaurant owners are committed to providing its customers, whom it calls guests, “with the very best experience. We are confident that we have a strong plan and a positive agenda to continue to evolve our brand and meet the needs of our guests for years to come.”

It’s the second survey in the past week or so to suggest Tim Hortons is taking a hit to its brand. Last week, an annual survey measuring the “most influential brands” in Canada showed Tim Hortons fell out of its top 10 brands for the first time in six years – to 16th from ninth.

Jeff Dover, principal at food-services consultancy fsSTRATEGY, said Tim Hortons has felt the pressure of bad press and negative social-media comments in the past while, especially tied to the minimum-wage hikes in Ontario in January.

Tim Hortons has also been feeling the heat from rival McDonald’s, which has been putting more focus on its coffee offerings.

“But there are a lot more people who prefer coffee at Tim Hortons,” Mr. Dover added, pointing to long lineups in the morning for a double-double. “It’s a very strong brand still.”

Rick Murray, managing partner at National Public Relations, said Canadians expect companies to act in a fair and moral way. “The precipitous and unprecedented decline are proof that they don’t think Tim’s is.”

Mr. Bourque said it can take two or three years for a company to recover from a hit to its reputation rating. 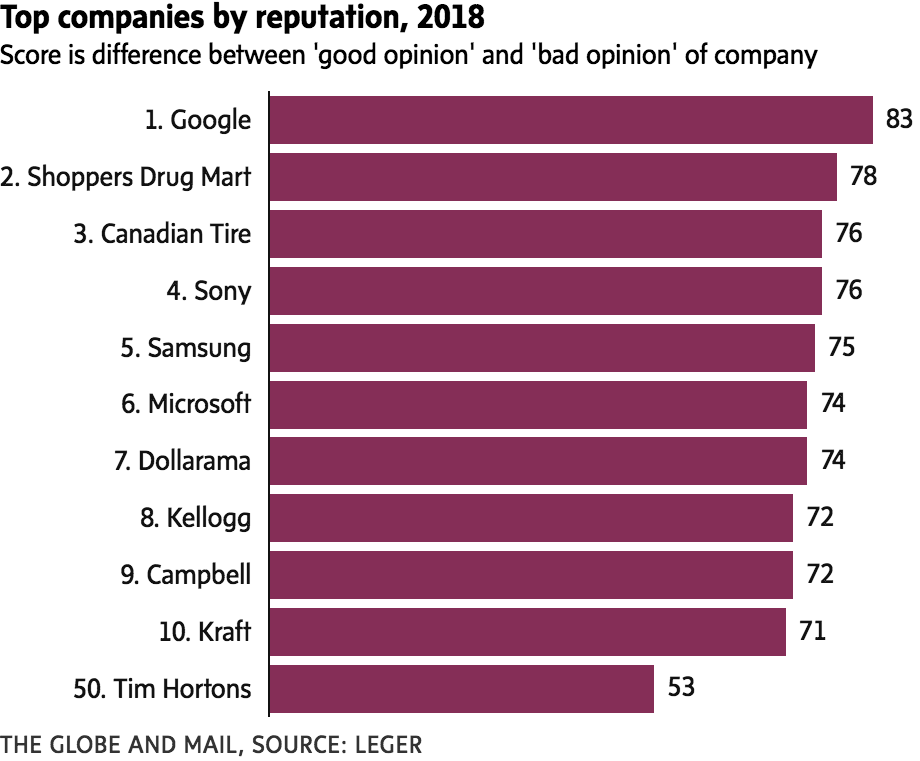 Mr. Bourque said that, even among the top 10 companies, overall scores were lower than in the past – except for Dollarama Inc., whose score was higher. The overall decline in scores suggests that consumers’ level of trust in companies is generally dropping, he said.

Still, the top three companies were the same ones as last year: Google Inc., Shoppers Drug Mart Corp. and Canadian Tire Corp. Ltd., in that order. Sony replaced Tim Hortons in the No. 4 spot, after being in 5th place last year.